Recently my boyfriend’s cat has become super clingy ever since moving in with him.

For example, I took the entire weekend off last week (bunkered down in my apartment with pjs on all day, did not go out one bit) and I LOVED it! Except… my cat loves to walk all over me during sleepy time, cuddle on my shoulder/arm WHILE sleeping thus creating a mini portable heater (and when she leaves, her little spot on the bed is sooo warm!!), and when I plop on the couch after work she 100% has to jump on me and knead.

It was annoying at first but it’s been so cute – recently, she’s been even RESPONDING to her name when I call it on the couch and she comes running to knead my belly XD its the darnest cutest thing EVER. E-V-E-R.

We’re also trying to incorporate wet food into her diet. She’s been eating dry food her whole life and at age six, we think it’s about time ~ we may feed wet food to her once a week~ for my kitty cat readers, how often do you feed your cat wet food? How often is TOO often or do you even feed your kitty wet food every day?

My boyfriend says that she owns me and is using me as a pillow, but I like to think that she loves me and wants to be closer to those she loves XD

Groceries and the Never Ending Budget

The boyfriend and I take turn paying for groceries each week. We used to do one big sweep at the local grocery store for the week and call it a day, but lately we’ve been trying to space out our groceries by going to more frequent trips at the market. Our goal for this new plan of attack is to eat fresher foods and create less waste. Of course, we’d like to see our grocery bill lower a bit as well, but we usually average about $70/wk which is pretty good for the two of us. 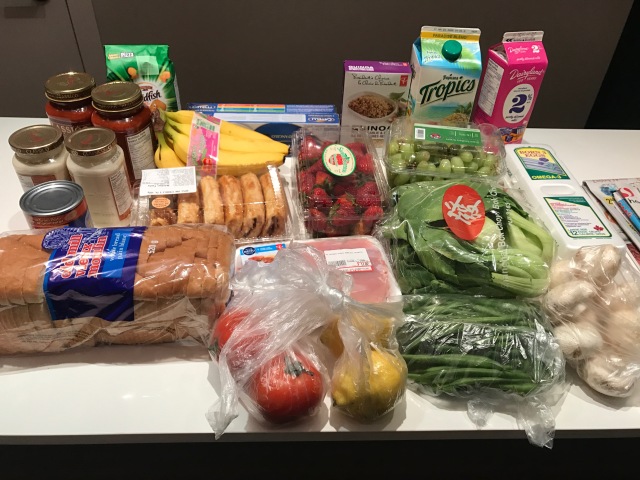 This is a general grocery haul full of our regular staples =) We have here:

So far, we’re doing good with using up what we have and eating our old food before buying new produce. But sometimes we forget to do a refrigerator scan before going to the market… lol. Does anyone else have this problem too?

I’ve been loving living in a strata environment! I’ve always been a people person and I love being able to meet new faces and such in my building community. Recently, one of my neighbours gave us a tupperware full of macaroni and cheese, and it really helped us for a dinner when we were strapped for time! It was such a lovely surprise to get their text on a weekday night. We are definitely friends now and have been for quite some time now, but that just totally brightened our moods ^.^ I just love living next to friendly neighbours.

I’ve been a receptionist my entire life and haven’t really been given the respect that I craved in my career. I quit my last job in a cushy downtown tower for one that’s not in a fancy tower, for a better work environment. Not only was I given a desk away from the reception area, I was given my own personal office today! It’s such a huge change from the day to day noises and I can actually focus on getting work done. This is the job that called me a Thursday for an interview, and I kept debating and only called back on the following Tuesday. Needless to say, I know now never to judge a book by it’s cover. I’m totally enjoying my new office!

There’s this girl at work. Let’s call her Megan.

Megan is the office ‘mean girl’. She would storm her way past everyone without saying hi. She wouldn’t even glance at you. She would throw her work at you so she wouldn’t have to do it. Yes, everyone in the office rolls their eyes when she storms by and mutters under their breath. I huddle in the kitchen with the other lawyers and assistants and listen to their gossips about her. If you dare ask her how her weekend was with a friendly smile, Megan would spit back “fine” and storm away. People tend not to have a positive outlook on Megan.

However, on Friday, I was in the lunch room when Megan (yes, stormed) came in to the office. I heard her empty her purse out frantically, shuffles, and a loud ‘fuck this!‘ before having a meltdown. Keep in mind she doesn’t sit near anyone other than an empty lunch room.

Turns out she lost her wallet with everything in it – passport, wad of cash she was going to deposit after work, ID, bank card, and her transit pass. Megan called the transit patrol office and reported her missing wallet between tears and begged them to find it for her. I was quite surprised to have witnessed such a vulnerable side from the resident mean girl.

I quietly emerged from the lunch room to see Megan sobbing quietly in her hands. I awkwardly tap her on the shoulder, and to my surprise, Megan explained how she worked a double shift the night before and was going to deposit the cash after work. I listened to her rant about being a ‘crazy woman, she hates herself because there’s no way home’. I felt compassion and even though I wasn’t sure of the type of person she was, I offered her my own transit bus pass so she could get home. She shockingly accepted it and gave me a big hug when I passed her my transit pass. I hugged her back and told her to place it back in my drawer in my cubicle.

The Monday after (yesterday), not only did she return my transit pass, but she also returned more than the fare that was spent and also a sincere thank you letter. In it, she wrote how she’s never been treated such kindness before and how she really appreciates my random act of kindness.

Needless to say, I’ve kept this letter in my wallet as a little thankful rainbow if I need a pick me up day by day. Through this lesson, I learned that everyone is indeed fighting a battle inside, no matter how tough they seem to be outside.

Now, I don’t really see Megan as the resident mean girl. I just see her as just another girl waiting for a second chance. ❤